When Design Intern Prescott Campbell isn’t creating things like custom parts for Airwolf 3D’s Dodge Hellcat, he’s a full-time student at Corona Del Mar High School in Newport Beach, CA. In this blog post, Prescott shares one of the challenges his school’s team faced when preparing for the 2018 FIRST Robotics Competition: Design 3D-printed encoder mounts with only days left until the big event.

Recently, the FIRST Robotics Build Season came to an end, but many parts still had to be made by the last weekend in order to finish the robot by the build deadline. As Corona del Mar High School’s team lead for CAD Design and 3D Printing, this was a lot of pressure on me. Fortunately, Airwolf 3D is a sponsor of our team.

Using Airwolf 3D products ensures that all of our robotics team’s parts come out extremely precise, minimizing the need to design around printing imperfections. Plus, I now have enough experience to feel confident using the printers, and I knew I could rely on them to create the parts with the quality and speed I needed.

One of the parts that needed to be made was an encoder mount. Encoders record the position of rotation of an axle, and we are using them so our programmers can write a program for the autonomous portion of each match. We needed to have an encoder interface with an axle on both the left and right sides of the robot.

The encoders are SRX Mag Encoders by Cross the Road Electronics. These encoders use a magnet that is concentric and flush with the end of the axle to record position. The encoder has to be concentric with, and in between, 0.75mm and 1.5mm from the end of the magnet to be accurate. This meant that both my design and the print had to be extremely precise in order for the encoders to work.

First, I had to design the part. As always, I started with a hand-drawn sketch. I made sure to account for every part I would be interfacing with to get an idea of what the part would look like. Most importantly, I identified the optimal dimensions for the part.

Once I finished, I went online and downloaded CAD files for any part with which the encoder mount was interfacing and any part that would be included in the assembly of the mount. I then opened SolidWorks and started with a sketch copied from the bearing block where the new part will be mounted. This was the West Coast Products Bearing Block, which we use to move the axle depending on chain tension. With the encoder mounted to this, it would move with the axle and therefore remain aligned with it. By using the sketch directly from WCP’s CAD model, the holes on my part and the bearing block would be perfectly aligned for through-bolts to hold the two parts to the robot chassis. However, I increased the size of the holes on my part so the threads of the bolt would slide through instead of thread in. I then extruded this modified sketch so I had a body to work with. 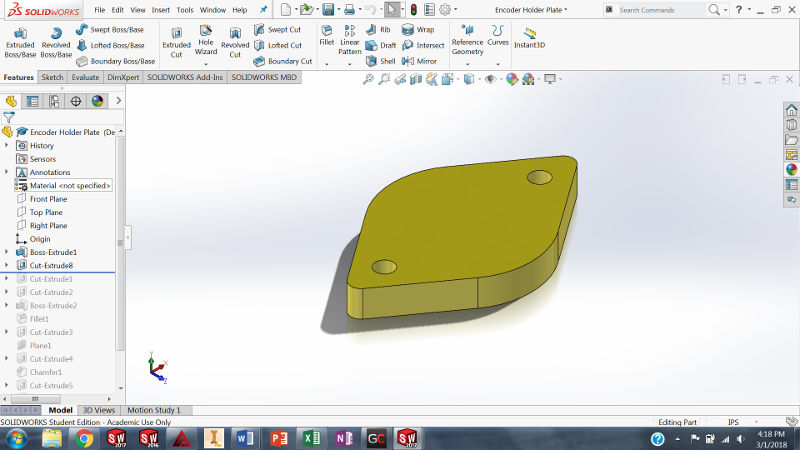 The next step was to create a pocket that the encoder would fit into. I used a sketch borrowed from CTRE’s CAD assembly of the encoder to get the shape of the encoder’s shell. I placed this trace on the center of my model to ensure it would be concentric with the axle magnet. I used the “offset entities” tool to make the shape a little larger so the shell could fit in. I cut this sketch into my part and chamfered the new edge so the shell would be easy to install. 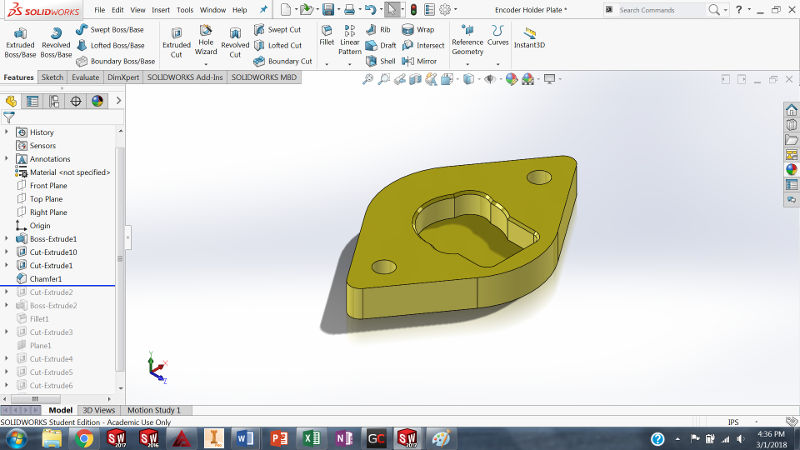 I then cut a hole through the thin wall created by my last cut. I made the hole big enough to allow the end of the hex shaft/axle to turn inside it, allowing the encoder to be within 0.75mm and 1.5mm from the magnet. 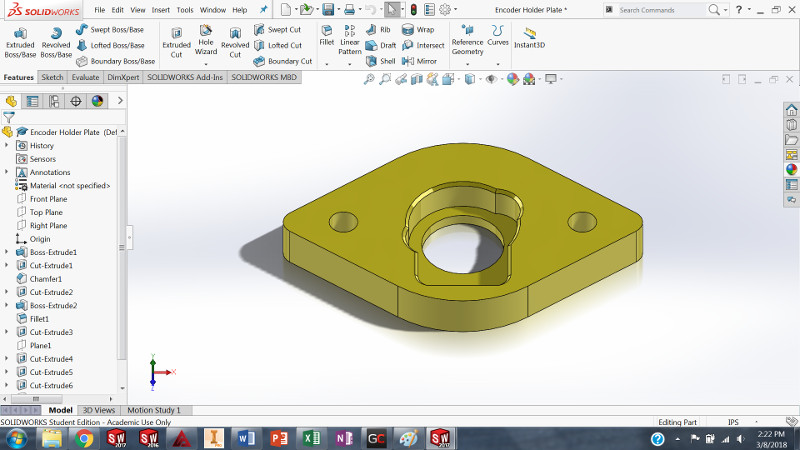 After that, I needed to create “legs” that would space the encoder out from the bearing block in order to make room for a spacer and a shaft collar. I extruded the sketch of the legs from the bottom of the model. On the bottom of the legs I chamfered the edges of the holes so that the flange of the print’s first layer would not be in the way of the bolt passing through it. 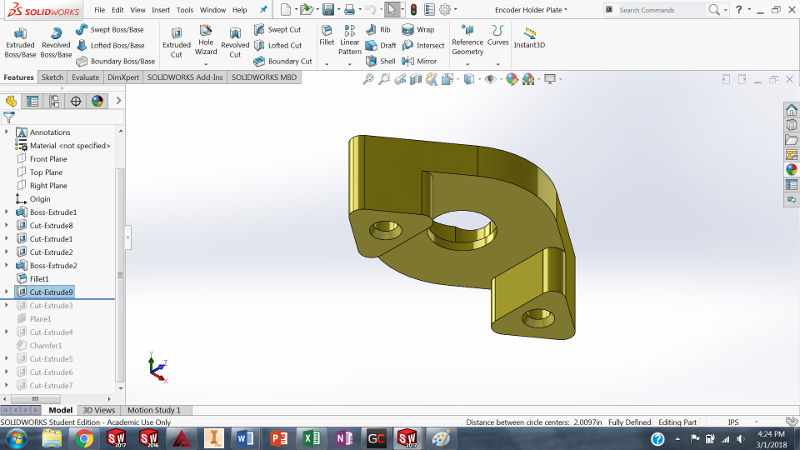 Now that I was done designing the part, I made a SolidWorks assembly with all the pieces that would be needed for installation in real life. This included the bearing block, longer axle, bearing, plastic spacer, shaft collar, encoder and magnet, and my new encoder mount.

I was satisfied with how everything lined up and started a print of two encoder mounts. I used APEX’s most precise Fine setting for printing in ABS. This way the part would be printed with the tolerance I needed to get the distance between the encoder and magnet exact. I increased the shell thickness from 0.5mm to 1mm thick and increased the top/bottom thickness from 1.2mm to 2.4mm. I wanted the top/bottom thickness to be relatively thick because the bolt holding the bearing block and encoder mount together would be tightened against this surface. After I made these changes, I started the print on the robotics team’s AXIOM Direct Drive printer. 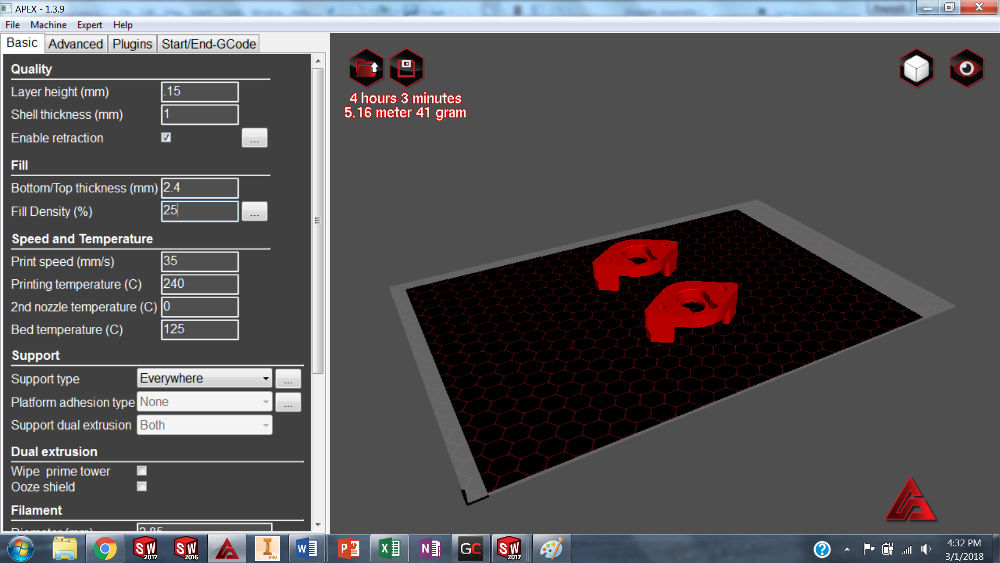 After trying to install the first version of the encoder mounts, the only change I needed to make was to create notches for the West Coast Products Cam, which is used to tension chain that last bit tighter than is possible with your hands. I did not account for this in my original design because I did not include it in my assembly. I made an identical notch on both sides even though only one was needed so I wouldn’t have to make separate left and right versions of the part. I made the top of the notch 60 degrees from horizontal so that no support material would be needed to print this overhang. 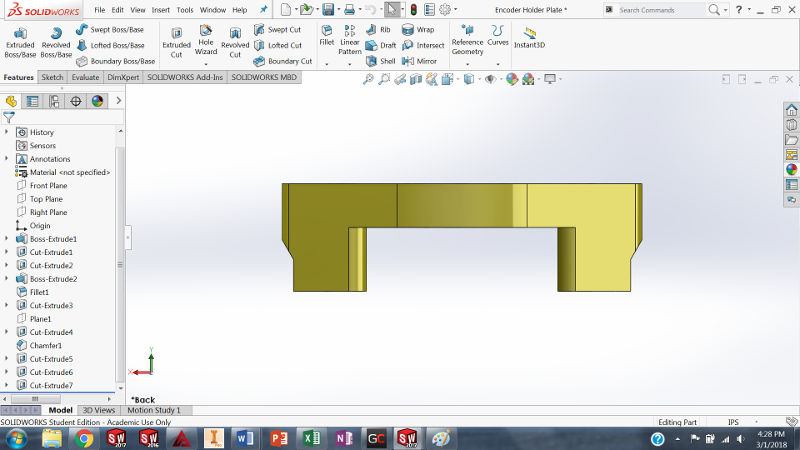 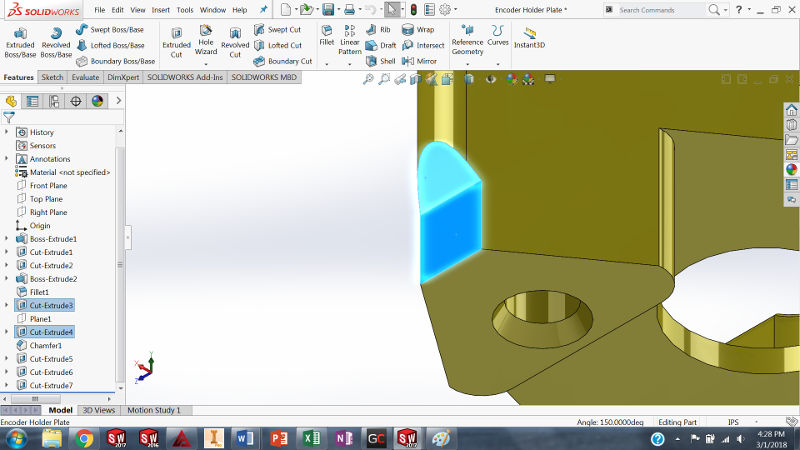 The final part came out great and fit the encoders perfectly — and it was finished with time to spare before the competition! Stay tuned. More projects are always in the works!