Signal Tide Is A Sound and Extraterrestrial Radio Installation That is Out of This World!

Berlin-based artists Kata Kovács and Tom O’Doherty  are interested in processes, sounds, and movements that come close to imperceptibility, and the ways in which this material can be transformed through layering, rhythm, pattern, and repetition.  In this project, they decided to combine real-time signals from an abandoned satellite that orbits the earth: the Lincoln Experimental Satellite (LES-1). LES-1 launched in 1965 to test devices and techniques for satellite communication. In February and March 2013, signals from LES1 were received again unexpectedly after 46 years. Amateur Radio sources announced that an amateur radio satellite enthusiast, Phil Williams G3YPQ, from North Cornwall, UK, had detected signals from LES-1 and determined the source after searching for identifying information on the internet. Some theorized that after 46 years, the batteries had failed in a manner that allows them to carry charge directly through to the transmitter, allowing it to start up when it is in sunlight. This revelation activated the imagination of and inspired artists Kovács/O’Doherty to start chasing it as it orbits the earth.

“Signal Tide will allow the LES-1 satellite to be serenaded with music derived from the place that it is originally from.” -Kovács/O’Doherty.

Each pass of LES-1 lasts approximately 40 minutes. As part of their testing process of different potential locations for receiving the signals, Kovács/O’Doherty decided to try and monitor a pass of the LES-1 from the grounds of LACMA, from the roof of the Art of the Americas Building. During that time, a row of overhead speakers play the audio from the live signal of the satellite from an antenna mounted on the roof of LACMA. At the same time, a series of ground-level speakers play a unique accompaniment specifically written and recorded to serenade the satellite as it passes overhead.

Kovács/O’Doherty came to Airwolf 3D to learn to use AXIOM 20. Afterwards they used this large 3D printer in Los Angeles at the LACMA Art + Technology Lab to print enormous speaker enclosures necessary for the art installation. The large speakers were printed with one of the strongest 3D printer filament and material called ABS. Together, with Airwolf 3D staff, they 3D printed 10 custom speakers enclosures for the art installation. The huge size and unique shape of the speaker enclosures was possible with the large build platform of the AXIOM 20 (The AXIOM 20 has a 20″ tall build platform and is capable of printing parts as tall as 20″) and a special 3D printing adhesive, Wolfbite, for printing on a heated bed with ABS filament. ABS was chosen as a durable material to produce these outdoor parts and the AXIOM 20 was chosen as the artists soon realized that it was the best 3D printer for this job. The large enclosed heated chamber and heated bed of the AXIOM 20 was critical to manufacturing these speaker enclosures in ABS, as other smaller 3D printers without the enclosed chamber or heated bed are unable to print in high temperature materials, nor are they able to print large pieces without warpage.

Where and When Can You Receive an Extraterrestrial Transmission?

The LES1 is always on and always transmitting a signal. The satellite orbits the planet multiple times a day, however, it will only be intercepted on September 21, 22, 23, and 24 in Los Angeles at LACMA by Kovács/O’Doherty.

Here is a link to the exhibit description: http://www.lacma.org/series/signal-tide

Here is a link to find out more about the artists: http://www.signaltide.com/ – https://kkto.net/

Kovács/O’Doherty (Kata Kovács and Tom O’Doherty) have worked as a collaborative duo since 2011. Their work combines elements of durational and time-based art, minimalist and electro-acoustic music and sound, movement, and video. This work often applies rigorous processes to simple but frequently-overlooked phenomena – they are interested in processes, sounds, and movements that come close to imperceptibility, and the ways in which this material can be transformed through layering, rhythm, pattern, and repetition. They live and work in Berlin, Germany. They have not advised when their next exhibit will be. The group is going back to Germany on Tuesday.  We will keep you posted when we hear more!

Airwolf 3D is a supporter of the arts and our staff warmly welcomes the opportunity to work with artists in developing inspirational, educational and technological opportunities. If you are interested in talking with the Wolfpack about your art develop needs and 3D printers in Los Angeles, please contact us at info@airwolf3d.com. You can read more about other collaborative artistic projects here:

“Marching Cubes is a compelling, interactive art installation that incorporates 1,600 3D-printed magnetic blocks that can be fit together in a myriad of shapes and configurations.

The installation is named for the “Marching Cubes” algorithm upon which it is based. The Marching Cubes algorithm is one that is used in computer graphics to create scan data images, such as CT and MRI scans used in the medical field. The process is a way of expressing three-dimensional data, so that it can be visualized on a computer screen.”

Cerritos College Art Gallery recently showcased artist Jeff Cain’s, “Canis Latrans no. 1” as part of its ART+TECH Artist-in-Residence program. The program was created to give selected artists free-reign to utilize the advanced technology located on the Cerritos campus. The Canis Latrans no. 1 was the result of a collaborative effort between Jeff Cain and a cross section of students from the Art department’s 3D-Art and Design program and the Engineering Design Technology program.” 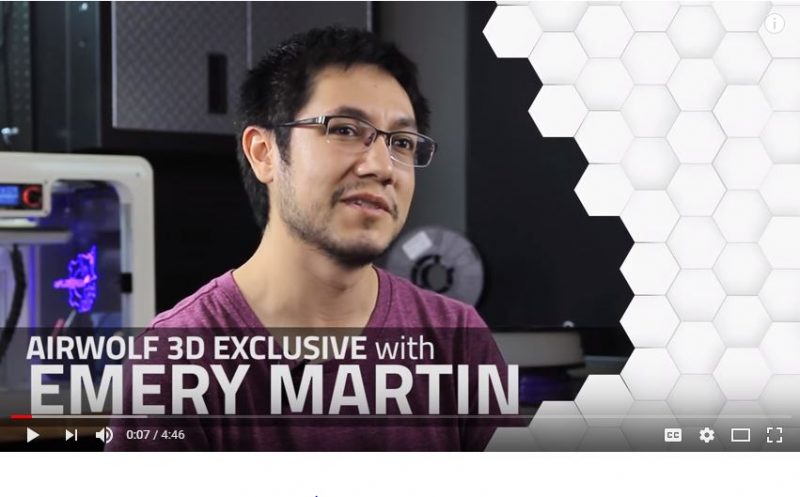