Hooked on 3D Printing is a new series from Airwolf 3D where we will test the strength of popular 3D printing filaments. To get this project done, we enlisted the help of one of our newest Wolfpack members, Kevin Coulson. Our intern for the summer, Kevin is a second year student at the University of California, Berkley and is working on a double major in Mechanical Engineering/Materials Science and Engineering. In short, he’s the perfect person to help with this project.

In Part 1 of this series, Kevin explains the design process behind the hooks used for our Material Strength Test.

The Design Process of a 3D Printed Hook

To test the strength of Airwolf 3D’s most popular materials, we decided to design and 3D print hooks in each material. The hooks will be used to rig a 150-pound tire to a forklift and then we’ll test the material’s strength by progressively adding more weights to the tire until the hook snaps. While not the most scientific process, it was a quick and easy (and fun!) way to test the strength of our filaments.

…when designing any functional mechanical part, there are three main things to consider: geometry, material, and the manufacturing process.

Requirements for the 3D Printed Hook:

Additionally, when designing any functional mechanical part, there are three main things to consider: geometry, material, and the manufacturing process.

For the first iteration of the hook, I looked to GrabCad for inspiration. Without thinking too much about the mechanical requirements of the hook, I chose to model an S-style hook because I liked the way that it looked and it would be easy to meet some of the requirements listed above. Below is the final model of the first iteration hook, modeled and rendered in Fusion 360. The overall dimensions of the part are 135mm x 50mm x 20mm. 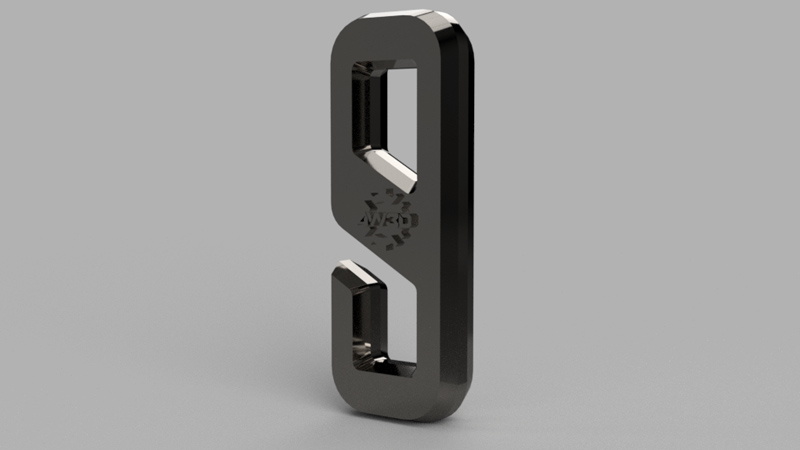 Symmetry and Stress in 3D Design

One aspect which I knew would be important was symmetry. The reason that symmetry is important in mechanical loading is because a torque on a part can cause excess stress. The concept of torque can be illustrated in many ways, but one of the easiest to understand is with weights.

If you hold a weight far away from your body with your arms fully stretched, it becomes significantly more difficult than if you were to hold it closer to yourself. The same logic applies here: If the load is applied off-center from where the hook is being held, there will be increased torque on the hook and the weight will have a mechanical advantage. Unfortunately, it would be impossible to create perfect symmetry because of the first requirement. Having one side closed and another open means that the stress can not be applied evenly throughout the part.

Stress can be thought of as traveling in lines throughout an object. When a part has discontinuities, the stress concentrates. This is visualized below:

As the area over which these lines can be drawn decreases, the lines must get closer together. Before line A, the stress is traveling symmetrically throughout the part. There are still concentrations along the sides because of the hole, but the load is symmetric and doesn’t cause any ridiculous loads.

In between lines A and B, the main discontinuity, the hook opening, occurs. The stress lines must be continuous and therefore have to travel to the right side, essentially doubling the load at the corner just below line B.

Sharp corners have a tendency to create stress concentrations and are often avoided in industry – for example, airplane windows were square in the 1950’s but air pressure concentrations caused failures, and now, these windows are rounded

So, this one design flaw appears to subject the part to extreme forces at the corners. It also demonstrates why S-style hooks are not used for industrial cranes and are only used for low stress uses, like in bungee cables and carabiners — though there are some carabiners that utilize latches on both sides so that there is more continuity throughout the part.

The last aspect of the design was the logo, and for this I arbitrarily decided to indent the logo 2mm and place it in the middle.

Putting Our 3D-Printed Hooks to the Test

To confirm the faulted design of this iteration, I performed simulations in Fusion 360. Shown is the result of a stress simulation with Nylon and a 200-pound load.

With regards to materials, the AXIOM series of printers allow for a lot of material options, so we will be testing a number of them, including PLA, ABS, PETG, Nylon, PC, Annealed PC, PETG Carbonite, and PBB. The manufacturing process will of course be 3D printing, and the orientation of the hook will be with the front facing side on the print bed. This is the best choice for multiple reasons: It will be easier to print and the layer orientation will be more mechanically favorable. In this orientation, the stress will be pulling perpendicular to the direction of the layers, which means that the layer-to-layer bonding inherent in the 3D printing process won’t be an issue. 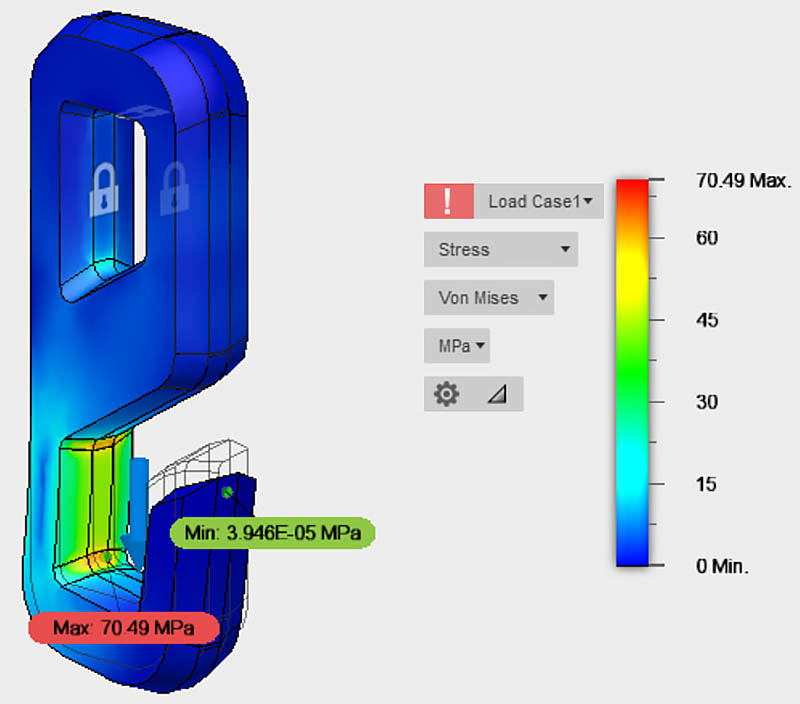 As predicted, the stress is concentrated around the corners and the part is expected to fail. Despite this, these parts will all still be tested to confirm the calculated errors. The next iteration of the hook will aim to solve the problems with this first one. Although the hook isn’t perfect, it’s a good first step to understanding what’s important in design for mechanical loads.

Ready for the Stress Test? Stay tuned for the next installment of Hooked on 3D Printing where we’ll share our results!