3D Printed JetPack: JetPack Aviation partners with Airwolf 3D to Accelerate the development of the World’s only true JetPack 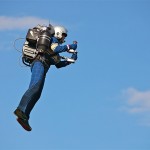 JetPack Aviation and Airwolf 3D believe that a JetPack should be just that – a jet turbine powered backpack capable of vertical takeoff and landing (VTOL), but also lightweight and compact. Small enough to fit in the trunk of a car, the JetPack is capable of carrying its pilot thousands of feet above the ground. Early testing of JetPack Aviation’s JB-10 indicate that it will achieve flights over 10,000 feet in altitude, at speeds greater than 100 mph, and with an endurance of 10 minutes.

Developed by the creators of the world’s first civilian RocketBelt, as flown at the 1984 Los Angeles Olympic Games opening ceremony and in countless films and television shows, JetPack Aviation has created the world’s only true JetPack. 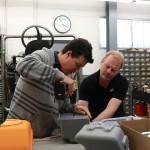 “We had been investigating more affordable options for rapidly prototyping our new JetPack fuel tank and teamed up with Airwolf 3D to print our tank on their AXIOM 3D printer with its large build volume” stated lead designer, Nelson Tyler.

The process of developing the JB-9 has been one of many years of design, testing and 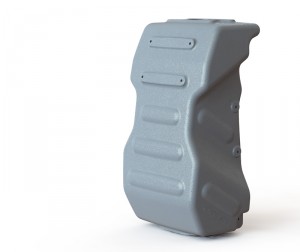 redesign. A JetPack, by its nature, must be lightweight and compact, have crisp handling, and be stable in all three axes of flight. While the RocketBelt catalyzes hydrogen peroxide fed under pressure into a silver screen catalyst pack, a JetPack requires systems to start and cool engines, manage fuel flow, and capture operating information for display to the pilot.  While the airframe design was helped by their earlier experience with RocketBelts, it still required numerous prototype iterations to arrive at the functional engine configuration and management systems. 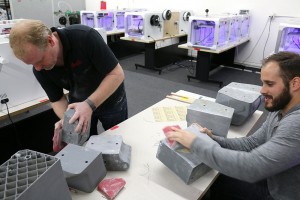 “We are thrilled to be working with JetPack Aviation to advance the future of transportation and proud that the AXIOM 3D printer was selected as the means to achieve JetPack’s rapid prototyping needs” stated Erick Wolf, CEO and founder of Airwolf 3D. 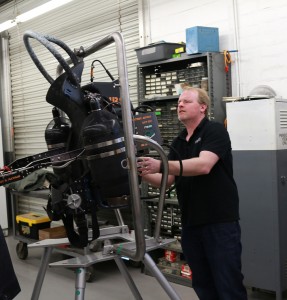 For the 3D Printed JetPack tank, making a master pattern using traditional 5-axis CNC
machining of modeling foam or aluminum costs between $5,000 and $12,000. However, using the Airwolf 3D AXIOM 3D printer, the total cost was less than $400. By utilizing the isothermal printing conditions of AXIOM’s chamber, and applying the Wolfbite adhesive, it is possible to print large ABS pieces without cracking or deformation. ABS is the preferred material for tooling, as it is significantly more dimensionally stable than PLA. 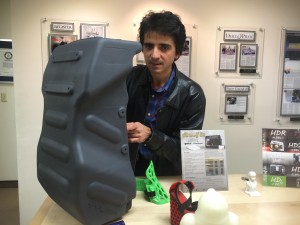 About JetPack Aviation:  The team believes a JetPack should be just that – a jet turbine powered backpack that is capable of vertical takeoff and landing, is extremely lightweight, compact, and can easily be carried around by the pilot.  The maiden flight of the JB-9 JetPack piloted by David Mayman that flew around the Statue of Liberty in New York City was conducted and announced publicly November 3rd, 2015.  JetPack Aviation is based in Southern California. For more information please visit www.jetpackaviation.com.

About Airwolf 3D:  Airwolf 3D is committed to manufacturing high-performance consumables, accessories and 3D printers that are fast, affordable, durable and easy to use. All 3D printers are made in America, manufactured in the USA. Currently, Airwolf 3D printers can be found in engineering firms, government agencies and schools worldwide. For more information visit www.airwolf3d.com, telephone (949) 478-2933, email info@airwolf3d.com.