If you were anything like me growing up, you were fascinated with anything that drove or flew that could be controlled rometely. From my first RC10 kit, to the sophisticated RC Car that was introduced in the early 2000’s, I was, and still am, an addict. Building these kits was a blast, but what if you could actually make your own parts, or even better yet, an entire RC Car from scratch?

For the past year I have been following an extremely talented 3D designer from Sweden, Daniel Norée, founder of the Open RC project and creator of several insanely cool 3D printed RC projects, all of which can be downloaded for free. I have always wanted to create one of these on our printers at Airwolf 3D, but I never got around to it due to my own projects taking up too much time. 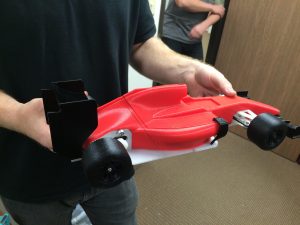 I had been holding out on printing one of these vehicles until just a few weeks ago, when his coolest project yet was released – the Open F1 RC Car. This was planned to be a piece to show off the capabilities of our new AXIOM line of 3D printers, but ended up being such a thing of beauty that Airwolf 3D decided to include it as one of our main show pieces at CES 2016. After the first one was created, two more shortly followed. 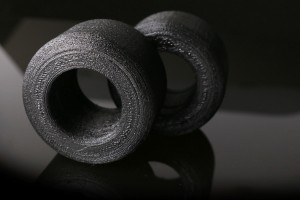 The Open F1 RC Car was initially created to be printed out of PLA. At Airwolf 3D we like to go the extra mile with our materials, and RC Cars are sophisticated pieces of machinery, so one material was just not enough. We needed the strength and rigidity of Polycarbonate for the axle, spoiler, and servo saver, while at the same time we wanted the beauty of PETG for the body and wheels. Where we needed strength with a little bit of flexibility, we used the incredible new 910 Alloy. Having the capabilities to use multi-materials, we could produce a car that could not only look good and drive well, but also is durable enough to withstand crashes. 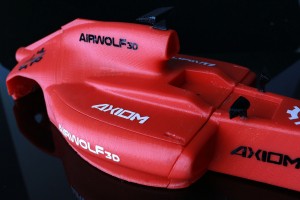 After the first car was complete, I was amazed to find that the RC Car could withstand a 9 turn brushless motor with the 910 Alloy gears and Polycarbonate axle. What I thought would literally tear apart with one pull of the throttle, actually held up just as good as its manufactured counterpart. Assembly was easy, with some minor dremel work and fitting due to shrinkage of some materials and a manual that was really only half way complete (he is working on an update for this), the cars were a pleasure to build.

The 3D Printed Open F1 RC Car project is for almost all ages and skill levels, and will really allow you to understand the capabilities of the AXIOM 3D printer, as well as the many materials it can use. Just remember, after you build the first one, many more will follow, especially if you are an RC addict like myself.

Come see the 3D Printed F1 RC Car at CES 2016 and enter the raffle for your chance to win your very own!