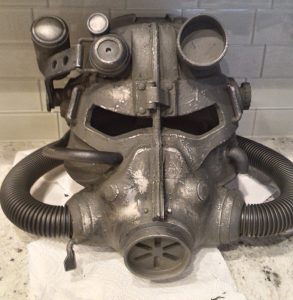 One of our first customers to order the new AXIOM printer, Bret, has recently printed a Halloween prop for his son. His son is a huge fan of the Fallout series, thus the software engineer went to work on an epic armour helmet. Bret settled on the Airwolf 3D brand due to working with DreamWorks Animation as a consulting contractor from Intel Corp., who also has one of our printers. We were lucky enough to have Bret answer a few of our questions about his previous background and process below:

What is your previous background with 3D printing before purchasing the AXIOM? 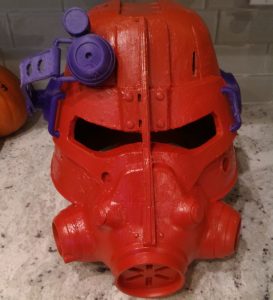 “I had never touched a 3D printer before in my life. I printed a few smaller prints when I first received the printer to have a better understanding on how to align pieces for printing to achieve the best results and minimize the print time.  It is interesting how changing the orientation of the piece can impact how long the print will take, how to minimize the quality of the outer facing face of the print and minimize the amount of material needed for supports.  I actually settled on your brand due to working with DreamWorks Animation as a consulting contractor from Intel Corp. and they have one of your printers.

What material did you use for the print? 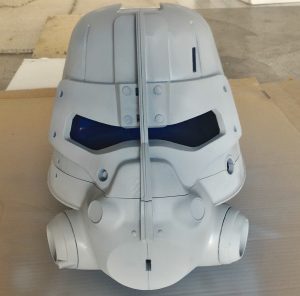 ABS plastic.  I would usually target fitting– 20 hours of print time for pieces on the printer at a time and the large print size of the printer was ideal for this. Every evening after work I would sort through my print list and assemble the 20 hours of pieces via Cura, load it on the SD card and print it. It kept my non-print time to a minimum, and after roughly every 50 hours of print time I would grease the machine– which was all the upkeep that had been required so far.  I had a few single pieces that took just over 24 hours to print, such as the lower front quadrants. I never ran into a problem related to the printer only my own newbie mistakes:

What was your finishing process? 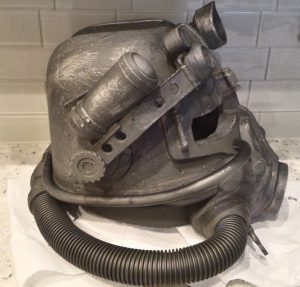 I printed the helmet with the .5mm nozzle with .15mm layers so the surface had the expected rougher finish.  I had a choice to either sand and smooth the surface or to go with a more stylized used/vintage look and chose the latter.  I ended up using silicon sealant to smear over the helmet to give it a rough dinged up finish,  followed by a few coats primer paint, then two cans of silver gloss spray paint,  and finally a drab green primer was added.  Before the final green primer was set, I wiped the helmet down with shoe polish, which is where larger amounts of polish were used to strip the green primer leaving only silver underneath. The helmet was tacked together with superglue and then finally epoxy to ensure it would stay together.”

If you would like to try out this print for yourself, you can find the file here.