Here at Airwolf 3D I’ve worn a few a hats before beginning my main job, leading our shipping department. One of those hats was running and testing the large amount of printers in our “3D Printer Farm.” After about a month I had become a natural at calibrating, leveling, and diagnosing any issues that might have arisen. Working for Airwolf 3D for over two years has taught me the ins and outs of 3D printing, but there was always one thing I never quite got around to learning and that was how to actually design! Oh the frustration of having access to all these awesome printers, but not being able to create something of my own! That’s when I became determined to teach myself Fusion 360, which led me to creating one of my first designs: A special Halloween 3D printing project.

Get started on a Halloween 3D printing project 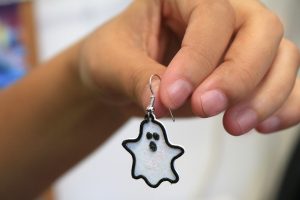 Ahhh yes, the start of my three favorite months out of the year. October, November, and December bring about a joy in me that no other months do. All the fun decorations begin to emerge and the weather starts to cool (or at least I hope it does!). This was the inspiration behind my Halloween 3D printing project, ghost earrings for anyone to wear! Since I’m still a newbie to Fusion I wanted to keep the design a very simple shape and that’s why I chose to do a white ghost with a black outline to accentuate it. The first thought that came to my mind was to design the earring for dual colored printing. 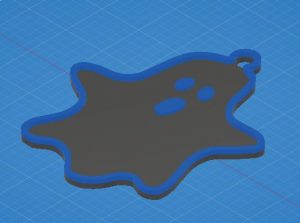 Just from being around amazing designers five days out of the week, I already knew that in order for me to achieve dual color I would need to design separate pieces. One portion that was going to be the white part of the ghost and the second portion the black parts. This is where I researched and utilized Fusion 360 bodies and components. Here’ s a link with further information on bodies and components.

Once I completed the two piece design, I 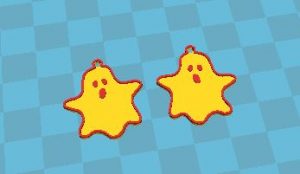 brought both objects into Cura and merged them together. I decided to print with PLA because of it’s ease of printability. To print a set of earrings took around 20-25 minutes. 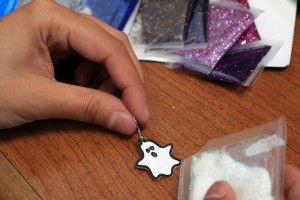 After the ghosts finished printing, my initial thought was that something was missing. What makes most jewelry stand out? Shininess! And that is where the fine dust glitter came into play. I went to my local Michael’s and purchased fine dust glittler and earring hooks. 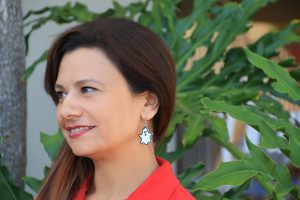 This Halloween 3D printing project, from the start of the print, to applying the glitter and attaching the hooks took less than 30 minutes. If you’re ready to get into the Halloween spirit you can find my earring’s STL file on Watertight and don’t forget to continue to follow my journey through creating and designing in Fusion 360!