”I now have a process of making components for my motorcycle that takes only three to four days with a 3D printer versus several weeks at a fabricating shop,”
says Jowell Randall while being interviewed about the pieces he created for his new Triumph Daytona 675R. Jowell is very familiar with the 3D printing process, as well as Triumph motorcycles, but he never thought additive manufacturing would be able to help customize his new ride. 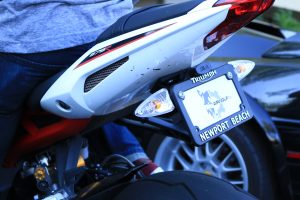 After Jowell purchased his Triumph, he decided that the original fender eliminator, or the tailpiece that holds the license plate, reflectors and turn signals, was both bulky and cumbersome, thus not flowing correctly with the otherwise contoured aesthetics of the bike. ”With additive manufacturing and 3D printing, I was able to streamline the process of creating the large piece I felt would fit the bike better,” he says.

When someone decides to put a modification onto a motorcycle, the more traditional type of manufacturing is metal based, either made of aluminum or casted to make a plaster mold with metal poured in and cleaned up. Then the fabrication shop would take the new piece to make individual cuts and pieces to fit the custom bike. Jowell decided that this process would not have worked for a one-off piece because of the extensive manpower, time and precision needed for the process. More importantly, perhaps, the bike would be unrideable for a week to two weeks for measurements and test fits. 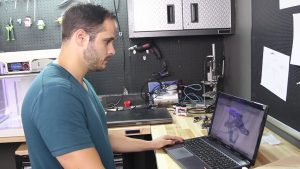 One of the initial positives of using additive manufacturing for either tooling or fabricating jigs is the fact that the engineer is able to make changes to the CAD model instantly and then 3D print the revised model in a matter of hours. From the designing, creating, and fitting steps, the 3D printer changes a design, engineering, and manufacturing process which could take weeks at a fabricating shop, to only three to four days. 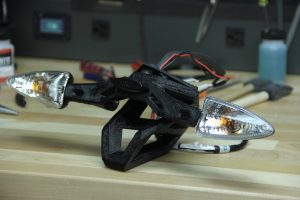 Jowell’s goal for his design process was to tuck everything into as small a package as possible, while maintaining the factory look and bike’s aesthetics. For this project, Jowell chose polycarbonate, since the strength of the material would be able to hold up to the external factors of the bike, such as speed, wind, heat, exhausts and rocks and other debris. After the completion of his new fender eliminator, the engineer is very enthusiastic about the future of additive manufacturing being used for bike modifications:

”Brake levers, housing and mounts for turn signals, or different sliding pucks to protect your frame are all possible,” he said.

He ends the video with relishing on the importance of Airwolf’s new AXIOM printer for his entire process. Unlike other 3D printers on the market, AXIOM prints polycarbonate, nylon and other higher grade temperature materials with ease. Not only does AXIOM use the strongest materials, its enclosed print envelope allows the parts to be built in high resolution with superior layer-layer adhesion, thus being able to withstand the scrutiny of admirers along with endless miles of highways. Jowell used Wolfbite Mega for better adhesion to the bed during 3D printing with polycarbonate.

Check out the video below. If you have any questions on Airwolf 3D or Additive Manufacturing,  please do not hesitate to email us at info@airwolf3d.com or visit or website at Airwolf 3D.