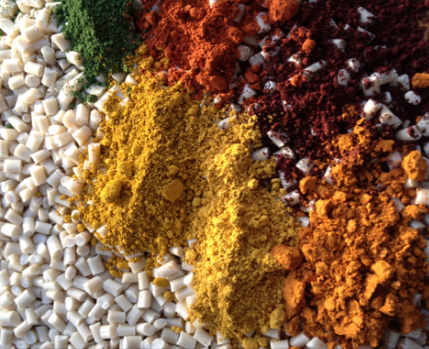 Airwolf 3D recently tested bioFila Linen, an interesting new biodegradable product from the company, twoBEars in Germany. BioFila Linen does not actually contain linen fibers as is customary in many other PLA based materials. Rather, bioFila Linen is composed of organic material known as lignins that are suspended in a PLA matrix. Lignins are responsible for providing strength and rigidity to the cell walls of plants and are one of the main ingredients found in paper. 3D printed bioFila Linen has a texture that looks a lot like linen (hence its name) and, according to twoBEars, is capable of producing  rougher, more porous-looking textures at temperatures above 205°C. 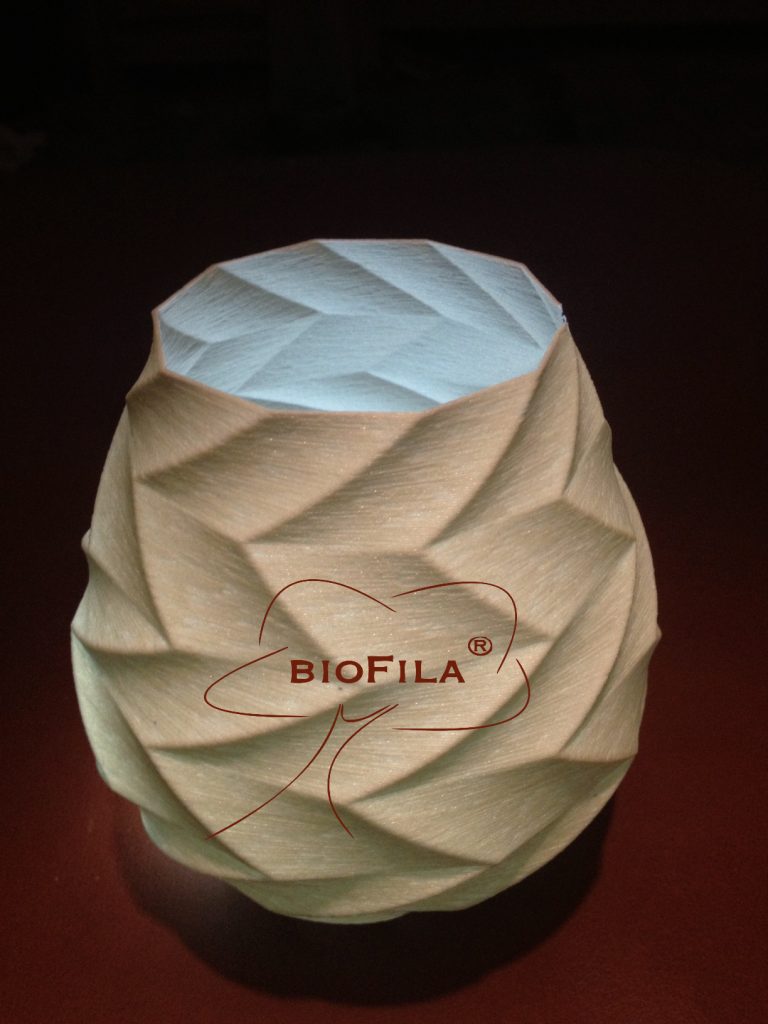 For our own test, we selected the default settings in Astroprint for LayWood  (220c hot end 70 bed. 1st layer at .4mm) which was at the far end of bioFila’s recommended heat settings. You can see below that the bioFila Linen printed smoothly and accurately, which seems to suggest that the material is very forgiving of variances in print temperatures. The resulting print has the rigidity of traditional PLA but with a visual texture that is similar to an old fashioned linen lamp shade. The embedded lignin material appears to add a high degree of impact resistance when compared to pure PLA at a slight cost to tensile strength. Below is a Material Data Overview submitted by twoBEars which compares bioFila linen to ABS and PLA. 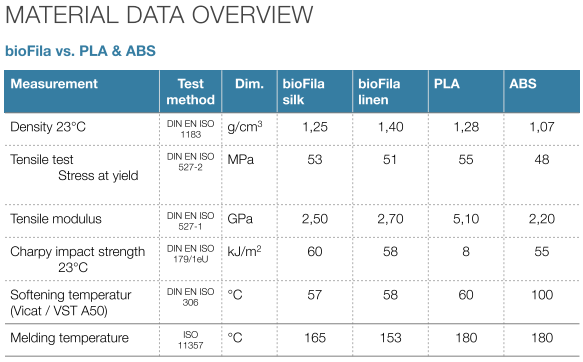 The biodegradability of bioFila Linen combined with its unique printing characteristics may offer advantages in certain applications. The aesthetics of bioFila Linen may appeal to artists while the ease-of-printing, biodegradability, and recyclability lends itself well to educational institutions where non-toxicity is also a major factor.  TwoBEars states that bioFila Linen is also food safe which suggest some potential applications in kitchenware and agriculture that may warrant further investigation. 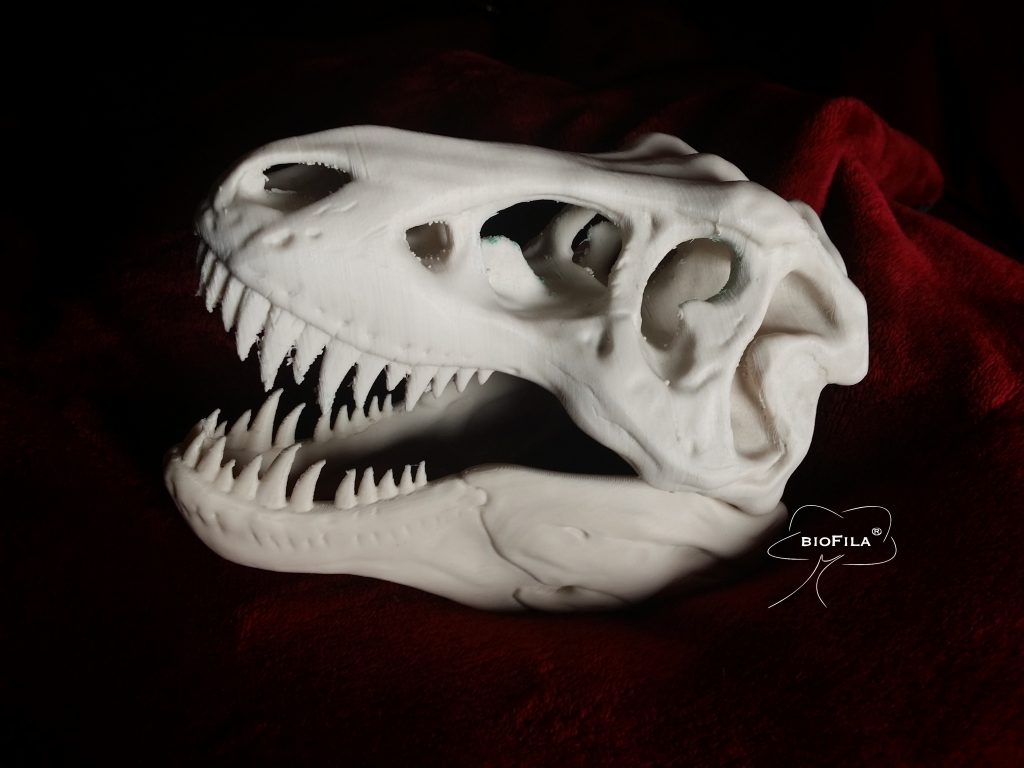 Since one of bioFila Linen’s chief selling points is that it is biodegradable, more time will be needed to investigate how the resulting prints hold up over time. Another twoBEars product named bioFila Silk was tested by an independent lab to degrade 100% in one year.  So, does this mean that your 3D bioFila prints will dissolve in one year? The short answer is, no. Objects that are 3D printed in bioFila Linen will last as long as long as they are protected from environmental exposure. We spoke to twoBEars founder, Benno Besler who described how bioFila Linen holds up over time,

“The printed objects will not change their aspect while staying in your apartment, but if you want to drop them out into nature, they will disappear in the same way as if they were made of wood…For example, my wife and I live in a very old house (350 yrs) that is made of wood, clay, and thatched roofing–all biodegradable–and after so many years it has always been a very good and comfortable home. Warm and dry and all.”

So, a 1-year biodegradability rating does does not mean that the user will be able to watch his/her projects decompose before his eyes like a rotting banana. It only means that when exposed to nature the material will decompose at the same rate as anything else that is made of wood such as a chair or a table, for example. If shielded from the forces of nature a 3D printed bioFila Linen object can last as long as Mr. Besler’s centuries-old home. What’s more: bioFila Linen will not leach harmful chemicals into the environment during decomposition like many other types of 3D printing materials. This means that ecologically conscious 3D Makers can either recycle their bioFila filament, or they can, at least, experience less guilt when sending yesterday’s treasures to the landfill.
If you would like to learn more about twoBears and bioFila products please follow this link to their: Website. 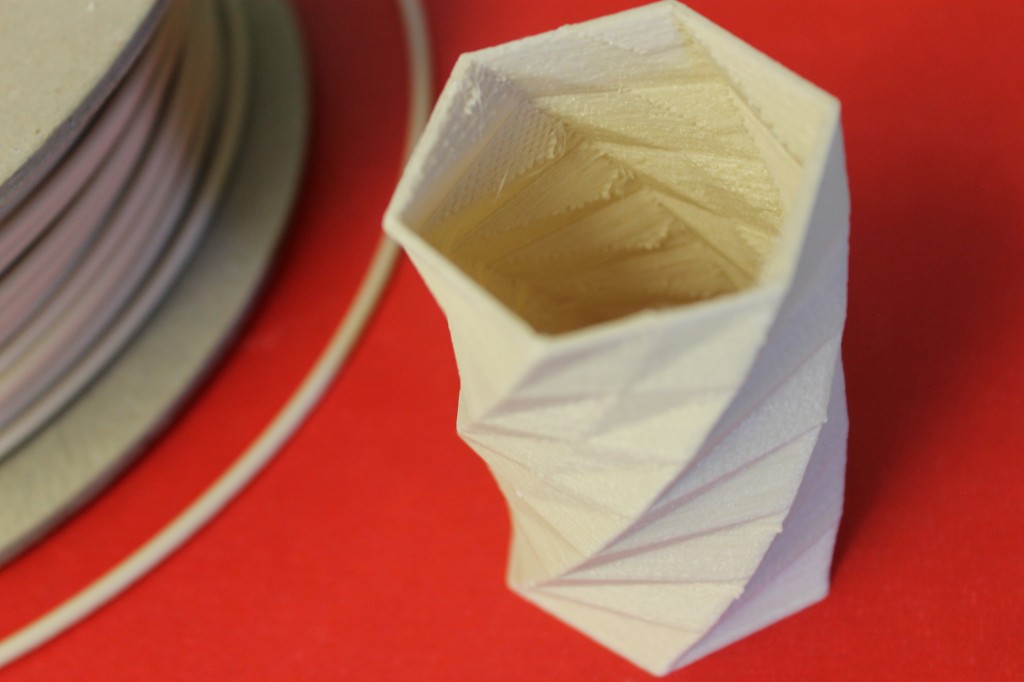 Airwolf 3D is committed to designing and manufacturing high-performance consumables, accessories and 3D printers that are fast, affordable, durable and easy to use. All Airwolf 3D printers are made in America, manufactured in the company’s 12,000 sq. ft. facility in Costa Mesa, Calif.  Airwolf 3D printers can be found in Fortune 500 companies, engineering firms, government agencies and schools worldwide. For more information visit www.airwolf3d.com, telephone (949) 478-2933, email info@airwolf3d.com, or visit the company’s showroom at 130 McCormick, Suite 105, Costa Mesa, CA 92626 for a free demonstration.