Have you asked yourself how do I make a 3D printed architectural model and does 3D printing have a place in architectural design? Absolutely it does! At least that’s what JB Architecture’s, Nat Ellis would say if he were asked. For nearly a year 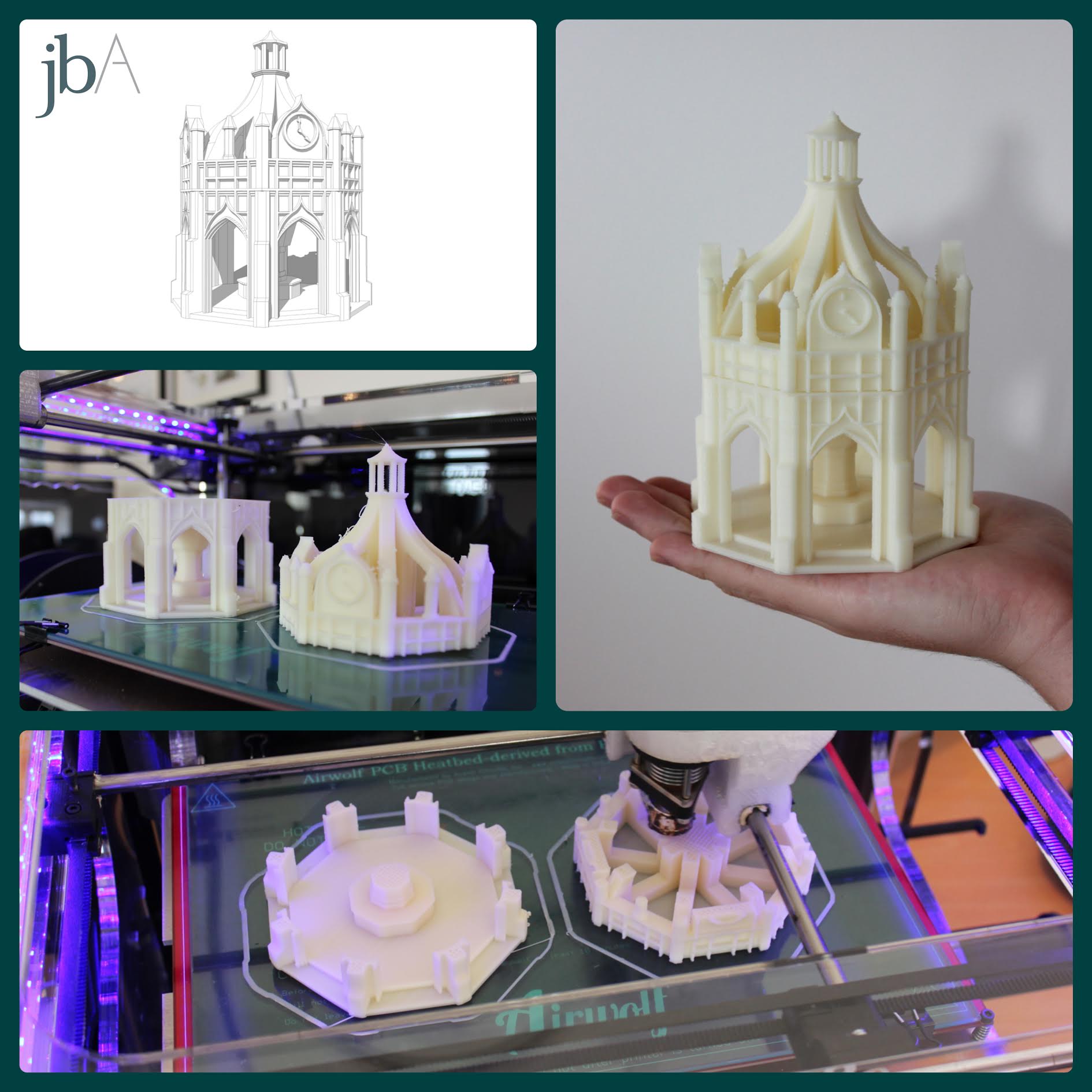 , JB Architecture, in Chichester, England has been using their Airwolf 3D model HDx to produce 3D renderings of all their architectural designs.  Nat believes that jbA’s investment in 3D printing technology has given them a competitive advantage over other agencies who rely on older methods of rendering. In a 2014 edition of Etc. Magazine, Nat remarked, “At jbA we have successfully set ourselves apart from other architects with our use of cutting edge 3D visualisation for all projects, no matter what size.” After seeing some of the work that jbA has been doing with their model HDx we believe it!

Nat’s statement about the irrelevance of size when determining when to employ 3D technology also marks a shift in the accessibility of 3D printers in general. While it is true that many industrial 3D printers can cost in excess of $70,000USD, consumers can now purchase highly capable desktop 3D printers at a fraction of the cost. The Airwolf 3D HDx, shown below retails for approximately $3500USD and can even be leased on approved credit! Read on to learn more about how 3D printers are being used in the field of architecture.

Bringing 2D Rendering to Life with a 3D Printer

As Head of 3D Visualisation for jbA, Nat takes 2-dimensional plans and converts them into 3-dimensional models. Not only is the 3D modeling process effective for conveying the final 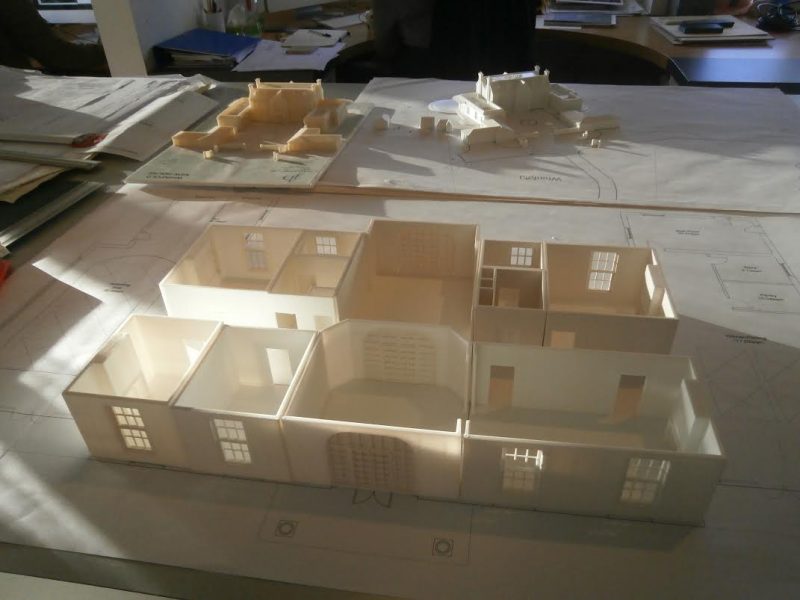 appearance of a design, but it is also useful for saving time and money during the design process. Nat reinforces this point saying, “It has not only helped clients get more involved with a project, but also helps give contractors on site a cleaner understanding of the end product to create a more streamlined process for all involved.”

The models that JB Architecture produce with their Airwolf HDx are scaled so perfectly that they can actually be placed directly on a blueprint to make the 2D images come to life! This is an important tool because it allows non-architects to “read” the blueprint with the same level of understanding as the designer. Nat Ellis 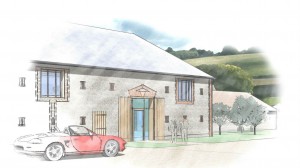 elaborated, “Most people can’t read, or haven’t had experience reading 2D plans so they struggle to visualise exactly what the property will be like”. The pictures shown here demonstrate the effectiveness of 3D printed models at displaying spatial relationships in ways that traditional rendering cannot. Compare for yourself: The image shown here uses modern software to simulate a watercolor portrait. It is attractive enough, but there is something not quite satisfying 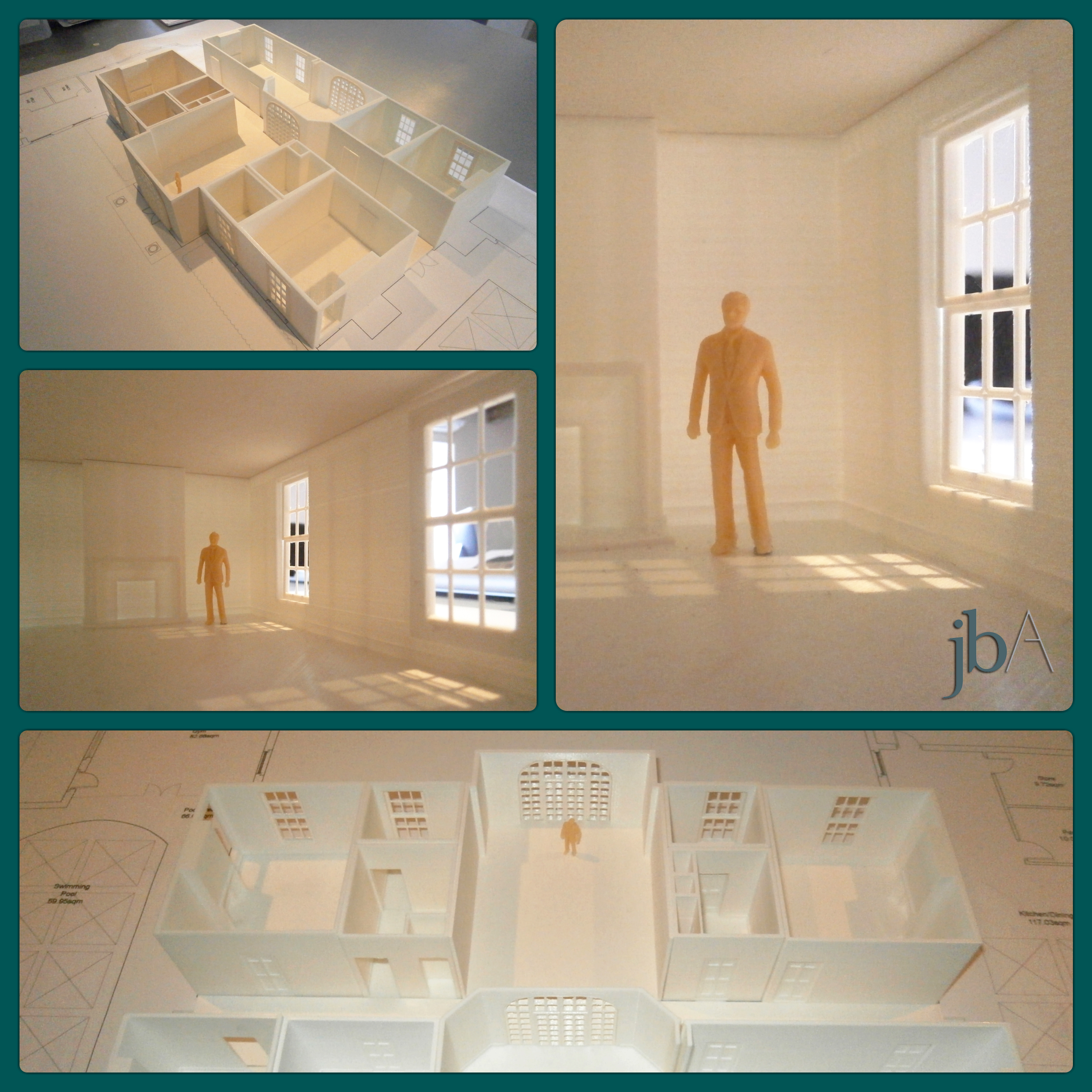 about this type of rendering. Most people do not want to be locked into a fixed perspective like this. Imagine the hesitation that we feel when we view an advertisement for anything. “Yes, it looks good from that angle” we think to ourselves, “but what does it look like from the other side?” With 3D rendering; however, users can satisfy that curiosity.

In fact, 3D printing allows users to satisfy a lot of other curiosities too. Take the 3D printed figurine standing in the room shown here. We can tell at a glance what this room will look like when it is occupied, and we can also adjust the lighting outside the model to see how the aesthetic will change throughout the day.  In the very near future it will be possible to digitally scan anything and then print it to scale in models 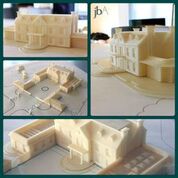 just like these. So, if a client wants to know what a room will look like with a couch in it the designer will be able to ask, “Which couch?” And, in a matter of minutes he/she will be able make a 3d printed architectural model of that exact couch to stage in the 3D rendering.  3D technology has been advancing so rapidly that companies like JB Architecture have already moved away from traditional watercolor renderings in favor of photo-realistic digital imaging and 3D rendering. Digital 3D imaging is more than just photo-realism though. Many real world phenomena can actually be simulated through software to show, for example, how a building looks at a particular time of day, or how various forms of lighting cast light and shadow on the structure. If you are not amazed by 3D technology’s role in architecture yet, then you are one tough customer!

Which 3D Printer is best for Architectural Rendering?

When director John Brown, tasked Nat with finding the right 3D printer for JB Architecture he gave the following list of must haves:

After sifting through dozens of makes and models, Nat finally decided upon the Airwolf 3d HDX which met every one of John Brown’s criteria, and then some. The large build volume of Airwolf 3D printers allow architects like Nat Ellis to create bigger 3d printed architectural models than most competing brands; and the dual print-head configuration enables designers to print models with more complex geometries. One of the best features about Airwolf 3D printers is that they do not require any specific software, or operating system, to function. Users are free to decide for themselves which CAD or slicing software to use and many users, like Nat, elect to use free software programs like Google Sketchup to create the high quality models like those shown above. Nat Ellis is so proficient with Sketchup and 3D rendering that he has been invited to speak at several prestigious events including the 2014 3D Visualisation seminar in Tokyo, and the 3D Basecamp Conference in Vail. One thing that architects have going for them is that they are already acquainted with the CAD software that makes 3D renderings possible. Many non-architects will attest that this was one of the most difficult hurdles they had to overcome when they began 3D printing on their own. So architectural firms can expect to be printing 3D models almost immediately after getting their 3D printers set up. If you would like to learn more about Nat Ellis, or JB Architecture you can read the Etc. Magazine article below, or click here to view their Website. 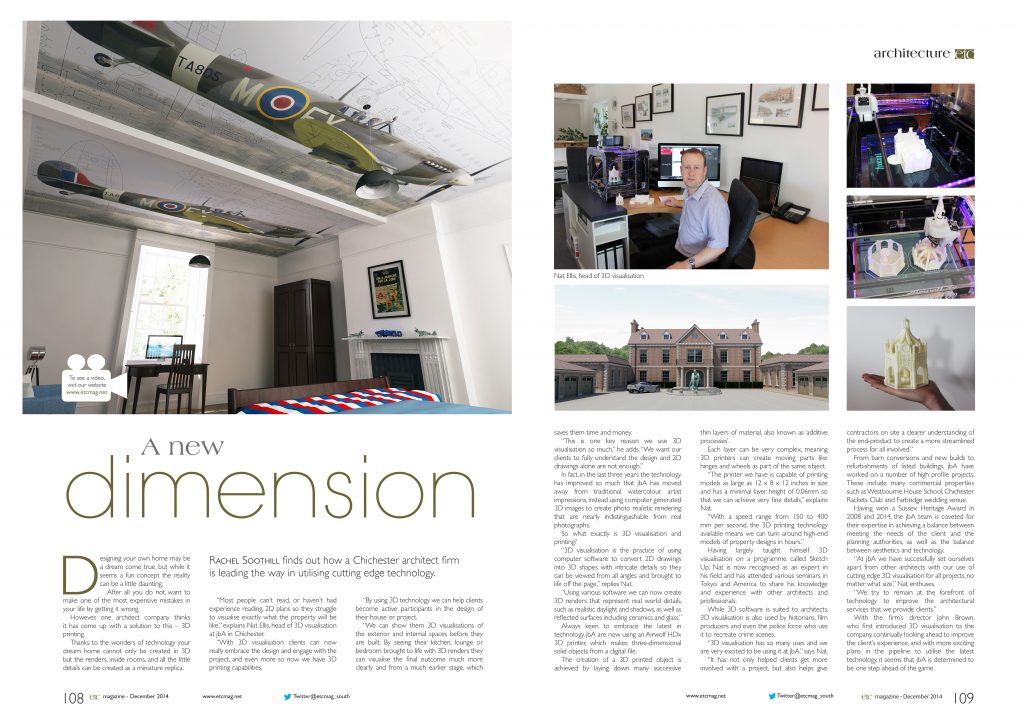 Airwolf 3D is committed to designing and manufacturing high-performance consumables, accessories and 3D printers that are fast, affordable, durable and easy to use. All Airwolf 3D printers are made in America; manufactured in the company’s 12,000 sq. ft. facility in Costa Mesa, Calif.  Airwolf 3D printers can be found in Fortune 500 companies, architectural and engineering firms, government agencies and schools worldwide. For more information visit www.airwolf3d.com, telephone (949) 478-2933, email info@airwolf3d.com, or visit the company’s showroom at 130 McCormick, Suite 105, Costa Mesa, CA 92626 for a free demonstration.