Cerritos College Art Gallery recently showcased artist Jeff Cain’s, “Canis Latrans  no. 1” as part of its ART+TECH Artist-in-Residence program. The program was created to give selected artists free-reign to utilize the advanced technology located on the Cerritos campus. The Canis Latrans no. 1 was the result of a collaborative effort between Jeff Cain and a cross section of students from the Art department’s 3D-Art and Design program and the Engineering Design Technology program.

According to Cain, the final project, shown here, represents over 500 hours and three months of design and production from start to finish. Canis Latrans no. 1, unofficially dubbed “Cyborg Coyote” by many viewers, was constructed of multiple tessellated polyhedral forms that were inspired by the utopian designs of Buckminster Fuller.

James MacDevitt, the Cerritos College Gallery director, suggests that,  “the semi-erased biological specimen literally fuses with modernist design tropes in order to reflect on the difficulty of reconciling California’s futurist and utopian impulses with the increasingly distant and endangered legacy of its wild past”.

Jeff Cain’s “Canis Latrans no. 1” was constructed entirely of ABS in natural and black colors which served to reinforce the contrast between the futurist and naturalist themes presented in the piece. The 3d art project was broken down into modular sections and assigned to various student collaborators before being reassembled into the final product shown here.
3d art project

The coyote portion of the piece was accomplished by scanning a taxidermied coyote and using 3d hardware and software available at the Cerritos College Engineering Design Lab and USC’s Roski School of Art and Design. Additionally, corporate sponsor Airwolf 3D provided a bank of printers for students to prototype and manufacture Canis Latrans no. 1. The partnership between Airwolf 3D and Jeff Cain’s team was a symbiotic one. Airwolf 3D conducts a rigorous 20+ hour quality control test before shipping new machines to its customers and they were able to use this testing period to print components for Canis Latrans no. 1. This partnership greatly reduced the volume of wasted product in the testing phase of production and fell in line with the green industrial ecology message hinted at by the Cain art team.

We caught up with Jeff at the Cerritos Art Gallery and asked him few questions about the project.

Airwolf 3D: What was the most challenging aspect of the project for you and your team?

Jeff Cain: The most challenging part was managing the project!  There were many great collaborators who would help out in little parts but may not have fully understood how it was all going to come together.  There were also many technical steps where each individual decision would depend on the outcome of the previous step.  This is made even more complicated as I was making an artwork whose “success” would be a measured on the viewer’s subtle and direct experience with a final object, not some easily measurable outcome or goal.  Trying to envision what that “success” would look like in a shifting range of technical possibilities was both exciting and stressful.   Luckily all the collaborators I worked with were excellent, and were very supportive and trusted me to lead the project to its completion.  I would have never been able to do this without everyone’s help!

Airwolf 3D: As an artist, what do you appreciate about the 3D printing technique?

Jeff Cain: 3D printing allows you the ability to make forms with precision and delicacy that I simply could not make by hand.  It also is an excellent medium for blending various disciplines and media.  For example I scanned the images with a camera, manipulated and planned the project digitally, and outputted a physical three dimensional form.  So this project is really a synthesis of photography, sculpture and design.

Airwolf 3D: How did you achieve the smooth, life-like effect of the coyote in contrast to the geometric pattern?

some galvanized steel buckets and lined them with absorbent rags dampened with acetone.  I placed the individual pieces on a small metal tray and left them in the vapor for about an hour.  It was very easy and I could source all of the materials from the local hardware store.

Airwolf 3D: Where can fans of Canis Latrans no. 1 view the piece now that the art exhibit is over?

Jeff Cain: According to the initial arrangement, I am donating the piece to the Cerritos College Art Gallery.  They will own and take care of the piece as part of the permanent collection.  It will not just stay in storage as they gallery is planning to make it available for loans and to also display it in the new Cerritos College art building currently under construction. 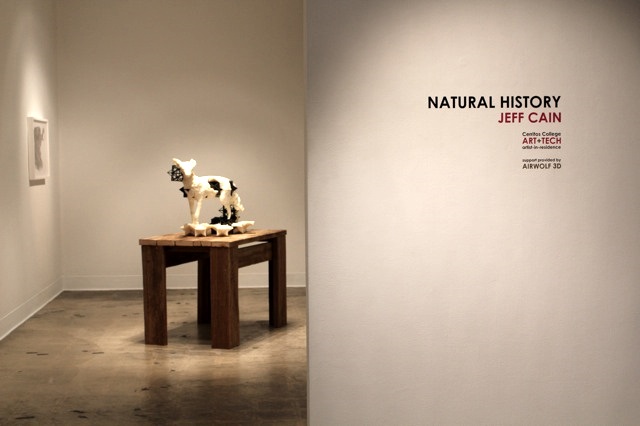