Airwolf 3D headquarters had been bustling with activity since the early hours of the morning. Team members were busy calibrating printers and packaging 3D printed prosthetic hands, aided by Ty Esham of Robohand USA. By noon that day, volunteers would begin pouring into the Costa Mesa warehouse, all with the hopes of changing lives and making history during the first ever Airwolf 3D Print-a-Thon and International Flash Print. 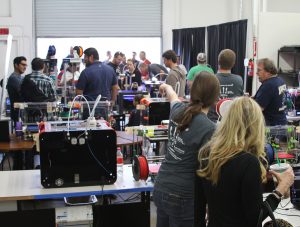 In a surprise twist, the day before the event members of the Airwolf team discovered that Letourneau University had recently reset the record of 3D printers operating simultaneously with an unbelievable 158 printers. Rather than balk at this feat, the team decided to step up to the plate and attempt to top it.
From high school teachers to engineers, volunteers came out of the woodwork, bringing with them all makes and models of 3D printers. Local retailer MatterHackers dropped off seven different printers as Airwolf 3D employees pulled tables off the assembly line to accommodate the load. Under the direction of department chair Miodrag “Mickey” Micic, students from Cerritos College school of Engineering Design Technology hustled to set up and calibrate their six 3D printers.

“We received an enormous outpouring of support from the community,” says Eva Wolf. “It was really moving. We could not have made this happen without them.”

At 5:00 PM, Erick Wolf took the stage and announced that a new world record for 3D printers operating simultaneously had been established that day at Airwolf 3D. The crowd erupted in applause, and an elated Wolf exclaimed “Thank you for your efforts, for this wonderful cause, and for helping to prove that the 3D printing center of the world is here in Orange County!” 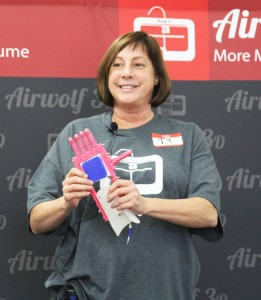 All in all, volunteers at Airwolf 3D printed 201 hands during the Print-a-Thon. Another 35 were submitted from Flash Print volunteers around the world. Eva Wolf presented Ty with a $2000 check for Robohand USA, and thanked her for her tireless work.

“We are so grateful to our volunteers, and to Ty and her amazing mission with Robohand,” says Mark Mathews. “This event is monumental for us. We wanted to show the capabilities of this technology, how we can unite people to work toward a greater good. I think we accomplished that.”

The fight is not over yet. We encourage everyone to continue to support Robohand USA by donating HERE