Don’t Miss Out On The Ultimate Robot Expo!!

“The Riverside Robotics Society is a group that promotes robotics in every way.”

As an official branch of the Southern California Robotic Society, the Riverside Robot Expo is a very exciting event for Airwolf 3D. This monthly meeting will include everything robots! There will be classes on robotics, tips and pointers, contests, and good old show n’ tell. The members create robots from mini “bug bots” to human-size robots. This robot expo is open to everyone over the age of 10 and those under 18 must have parent present. It is free admission and costumes are definitely recommended!

We will be TAKING OVER THE LIBRARY!

This year the Riverside Robot Expo and Star Wars Reads are joining forces with the Inland Empire Saber Team! They will be showing off their latest light saber technology in their amazing costumes! By attending this event, you will witness the first live Robotics Competition and more than 100 Robots exhibited in a library at one time! 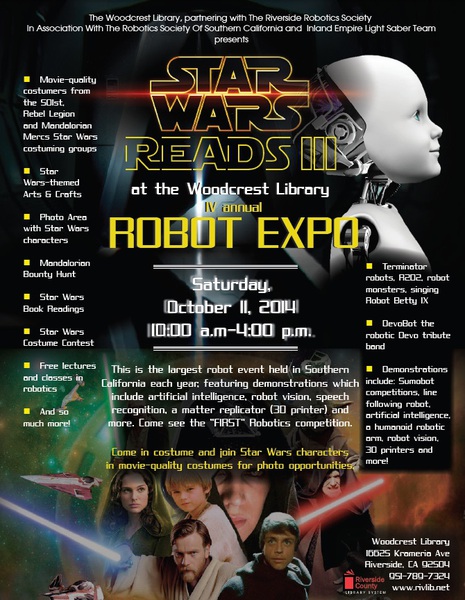 Here is a list of some of the exhibits at this years robot expo:

– Life size R2D2 built by our very own Steve S

– Local FIRST Robotics teams and their robots will compete

– JPL’s John Write will lecture on Avoiding Tickets while Driving the Mars Rover!

– Demonstrations in robot building and microcontrollers

– Robot Soccer where YOU control the robot

– Mini Drone (quadcopter) Racing, where YOU control the DRONE

So don’t miss this event and please feel free to wear your Mr. Spock, Anakin, Dr. Who, Darth Vader, Terminator, Princess Leia, Steampunk, Klingon, Wookie, Dr. Smith, B9, Wall-E, or any hero you look up to! See you there!