Airwolf 3D Does It AGAIN!

You asked for the dual, now check out 3D prints that will make you drool!

Here at Airwolf 3D we keep pushing ourselves harder and harder in order for our 3D prints to remain strong but also to push our 3D prints to new levels. If we kept printing the same thing over and over again, not only would our customers get bored but so would our team. Erick Wolf knew he needed a new “WOW” factor that was produced from our Airwolf 3D HD2x dual head 3D printer. He needed the print to be complex but he also needed it to portray the smooth transition from color to color. Our tech specialist, Cameron Williams, decided he wanted to take control of this project. Cameron is not only one of our tech specialist but also a brilliant designer. Going into this project Cameron knew he needed to print something that makes your head turn and that is precisely what he did! 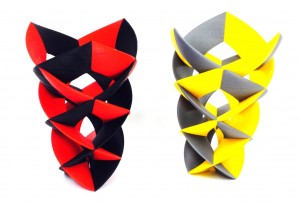 Cameron chose to use Solidworks on this project to create this vase. In his first attempt he was able to generate a simple vase with only a one way spiral. When the part didn’t seem to flow well, he decided to make the vase twist.

When you first begin to create a file for 3D prints it can take time, but not for Cameron. It took him about 10 minutes to design this part! After his design was complete, this 10 inch vase print job took about 18 hours. He used our Airwolf 3D ABS Black, ABS Red, ABS Silver and ABS Yellow. 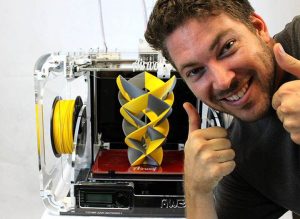