Glo Rails Light Up the Night

Constructed of 1.9-inch polycarbonate tubing (cut to order), the Glo Rails are equipped with watertight 3watt LED modules in aluminum housings, along with custom 3D printed elbows and installation hardware.

The People Behind This

With the help of an Airwolf 3D printer, Bryan Hickman, a former oil worker from Conroe, Texas, has invented Glo Rails—lighted tubes that can be mounted on cars and trucks. These rails can enhance a vehicle’s visibility and safety, as well as its utility at night. Now President of Dinjee Systems LLC, Hickman is using the Airwolf 3D V.5 printer with ABS filament to design and manufacture the elbows that attach the Glo Rails to vehicles. After working on the project for nearly two years Hickman was awarded a patent in January 2014. 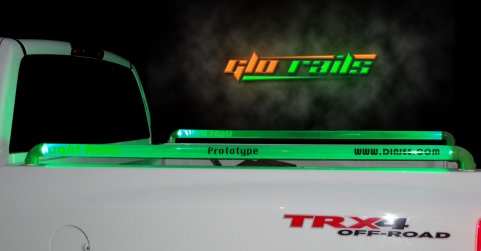 How To Get One

The kits are available in a number of colors, and prices range from $187 for the basic model that connects directly into the tag light; $229 for the deluxe model that includes a wireless flash controller; and $269 for the Amber model that provides a flashing system appropriate for construction projects and hazardous.  It has been Hickman’s experience that the Glo Rails sell themselves. He is continually approached by curious onlookers and fellow motorists when in his Glo Rail equipped truck.  He believes that the potential market for these glowing tubes also includes boats, ATVs, indoor décor, emergency lighting systems, logos, advertising—the sky’s the limit!