What is PET film and how does it affect 3D printers?

Airwolf 3D printers applies a polyester film (PET) to the borosilicate glass plate before shipping out with a new 3D printer or 3D printer kit. We have found that ABS adheres to PET better than Kapton and it is more durable than Kapton, resulting in better part stick and less tears to the printing surface on your 3D printer glass.
One of the PET products that we like to use is a 200mm wide strip of PET adhesive green tape that is approximately 0.06mm thickness. This particular product is sold on a roll and has no backing (liner). This is a high temperature resistant film which is often used as an electroplate mask shield during a wave solder process on PCB .
We apply this film to the glass using a “wet” method, which is similar to applying tint to a car window. The benefit here is that this is a good method for beginners, as the wet film is much more forgiving and can be manipulated and repositioned during application. The downside is that the film will need to “cure” for at least 10 hours, during which time the moisture will evaporate and the PET will adhere to the glass well. If you use the glass too soon, you run the risk of forming bubbles under the PET film when the glass is heated up. 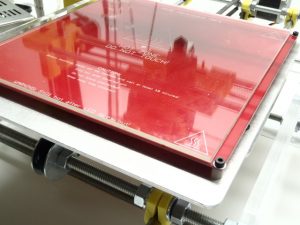 What parts and tools are necessary to apply PET film?

Follow these steps to apply PET film to your glass plate

What follows are the steps we take in applying a wide strip of PET using the “wet” method.

Step one: Unrolling the PET film

Have all of your tools readily available within an arm’s reach. You will not have time to stop and go to look for something later as this is a swiftly performed procedure. Start off by finding the edge of the PET roll and then peel up a 1″ flap. Adhere this flap to the edge of a table and use your foam to press the PET into the table, ensuring a good stick. (Don’t worry about removing the film later, as this is a medium tack adhesion and typically comes off with moderate effort and does not leave a residue.)

Next, you will peel off and unroll enough film to cover your glass, about 11″. To do this hold the roll with both hands and swiftly pull it down and away from the table in one strong, quick movement. Do not stop and start during this step, because this will leave a mark or crease at your stopping section and this may result in air bubble or lines in your PET film. It is better to unroll a couple of extra inches than to fall short. Gently release the roll and let it hang in this position momentarily.

Step two: Position the PET film onto the glass

Get your glass plate and apply a fine mist of water ensuring that it is completely saturated. Try not to touch the printing surface as hands can leave a residue which may prevent proper adhesion. While lifting up the roll and film, carefully place the wet glass under the film and line it up with the glass. Once you are satisfied with the placement, hold the glass in position and use your blade to cut off the roll of PET film, leaving a 1″ flap. Then cut the other end of the film (closest to the table edge), again, leaving a 1″ flap. This will release the glass and now it should have a 1″ flap of PET on both ends.

Lay down the glass on a clean surface and lift one of the corners of the film about half way to the center. Hold the film up and away from the glass at a 45 degree angle and use your squeegee to press the film down and to remove any air bubbles. Work your way from the center of the glass to the corner. The center of the glass is the most important and if you see any air bubbles, it is best to pull it back up while it is wet and try again.
Next, pull up the film from the opposite corner and repeat. Do this until all of the water and air bubbles have been worked out of film.

Next, use your sharp blade to trim the two flaps. You will want to hold the blade against the edge of the glass and bring it in slightly so that it is at a 45 degree angle. Airwolf 3D glass plates are custom fabricated with a “pencil cut” edge, a type of beveled edge. Cutting the PET at an angle prevents the possibility of a loose flap, which might result in the film curling up later on your 3d printer glass.
Next, place your glass on a paper towel and once again use your squeegee to press out the edges and work out any residual water.
Remove it off the paper towel and set it aside on a dry, flat surface to dry for at least 10 hours before using it on the heated bed of your 3D printer. Do not leave objects on top of the surface as this may leave an imprint on the film.

WATCH INSTRUCTIONAL VIDEO HERE. Has this information been useful? We appreciate your feedback. [pwal id=”27768765″ description=”Let us know that you like it once – then watch tutorial”]

These are instructions for applying this particular width and thickness of PET film.  There are many other widths and thicknesses which may require different methodologies, such as a dry application.

You can find this PET film on ebay here eBay PET.

Airwolf 3D printers will soon offer thicker sheets of PET with a liner.  We will announce the availability of this new product on facebook.

You might also purchase 3D Printer PET film sheets (with a liner) from Airwolf 3D at our store.

Are you looking for borosilicate 3d printer glass?  You can purchase it here, in our webstore.