Case Study in Rapid Prototyping with a RepRap 3D Printer

The answer is, “Many, many, many things.”  Take for instance the blue parts in the photograph below.   These are parts of an Airwolf 3D printer.  These parts have been engineered to perfectly snap fit and hold  LM8UU bearings in place, without the need for unsightly zip ties.   Powerful open source software, such as Slic3r allows the designer to customize settings, such as fill percentage and layer height to dictate the level of density of 3D printed prototypes.  These parts have been redesigned then 3d printed time and time again, until the perfect combination of form and fill percentage was achieved.  These parts were also put to the test, by snapping in the bearings and removing them many times with varying degrees of force.

With the use of an in-house 3-D printer, the designer / engineer was able to quickly make variation after variation of the model until the ultimate design was achieved. 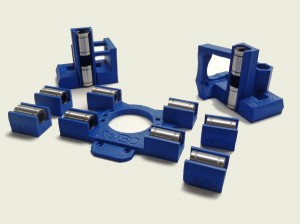